Get to Know Your Pve Neighborhood Watch Board

​Merlin David is known by many in Lunada Bay and beyond.  Whether you encounter him on his regular 5-mile walk, through school events with Lunada Bay Elementary or at some other event in the City, you are going to meet a contagiously friendly and enthusiastic member of our community – who will make sure you take a selfie with him.

His story and family were featured in a 2020 article in the PV Magazine.  What you didn’t get to know is that he is on the Board of the Asia America Symphony Association (David Benoit, music director) and he has been the President of PVE NW for 2 years and is continuing his leadership in 2021.

He has been a staunch advocate for making sure that we have a Block Captain for every street in PVE.  Merlin reminds us constantly that “Block Captains are the backbone of our organization.”  He continues to recruit neighbors in his area of Lunada Bay East to build a wonderful network of Block Captains helping neighbors.  His care for others is infectious and has set a wonderful tone for PVE Neighborhood Watch.
​
Merlin is a collaborative and inclusive leader which means that everyone has a chance to be a part of the contribution (and fun).   PVE Neighborhood Watch continues to grow, providing more value to the community with his spirit at the helm.  His vision for the organization has been to focus on safety and community connection.  With those 2 items in place, neighbors get to know each other and watch out for each other.  That makes for a better and safer community.

Valerie Gorsuch has been contributing to the safety and well-being of residents in our community for years.  Not only has she been the Vice President of PVE Neighborhood Watch for 2 years, she has also been active as the Malaga Cove Area Coordinator.

She had a wonderful feature article in the Peninsula News which highlighted her enthusiastic approach to life and her many accomplishments and contributions.

Notably, she has been a passionate volunteer for PVE-CARES, helping with the calling campaign to Seniors during the first few months of COVID, where she made 500 calls to seniors to check on their progress in the first months of the quarantine.  She contributes with energy and enthusiasm, helping others and making friends.

Valerie also brings lightheartedness and laughter through her gifts as a comedy player.  She has been a member of April’s Fools Improve Troop since 2003.
​
We are happy to have Valerie as a “can do” member of our team who has a lot of heart and provides a lot of happiness.

Meet PVE NW Treasurer, "Who Hits it Out of the Park", Larry Manth

Larry Manth has been with Neighborhood Watch since 2013, serving as president for 4 of those years, then moving to the role of Treasurer.

He and his wife and their 4 kids live in Lunada Bay.  With an active family, he has also been involved in various community activities including AYSO, Lunada Bay Little League, Y-Guides, Cub Scouts and volunteer teaching PE at Lunada Bay Elementary.

He started in PVE Neighborhood Watch after his neighbor was burglarized and devastated with the loss of family heirlooms.  Now he is committed to calling the police whenever he sees something suspicious and making sure to contribute to the safety of our community.

Prior to COVID, you could see Larry coaching a variety of youth sports teams.  With the shutdown, Larry is enjoying home life as a short order cook, tutor, personal trainer and chauffeur, all for his kids.

We’re happy to have Larry’s energy and community connection as a part of our organization.

Bob Stearns grew up in PV, went to Miraleste High School and went to a local University (hint:  Cardinal and Gold).  He had his first career in environmental engineering and testing and did work with local ports and the PV Shelf (DDT).  His current career is supporting the family real estate business (Stearns Lieb Team).

Bob says, “The best thing I ever did was to take a year off with the family to travel to Australia and the Far East.  We grew together as a family, shared incredible experiences, gained new perspectives and gave the kids a thirst for adventure. I highly recommend this adventure to anyone who can swing it."

He and his wife, Janet, enjoy creating memories with their three kids and three grandkids.   He keeps busy with tennis and is a Board member of PV Tennis Club.

If you’re in Montemalaga and interested in being a Block Captain, Bob can answer your questions and help you become a part of our team.

Karen Logan has been working with Neighborhood Watch in various roles for over 10 years. Having had a burglary at their home in their first years living here, she was compelled to help others not have the same heartbreak and got involved as a Block Captain.

Originally a long time resident of the Hollywood Rivera, she enjoyed childhood bike rides and walks in Valmonte. Karen reflected, “It has been a dream to live in this area and I am so proud to live here and contribute to this community.

Karen loves walking, hiking and smartphone photography on the trails and streets in the area.  You may also see her on the City streets riding her Vespa, taking in the views and vistas and appreciating our City’s beauty from a different perspective.

Karen is the Area Coordinator for Valmonte and welcomes Valmonte neighbors to contact her about being a Block Captain.  “It’s a fun, simple and rewarding way to contribute to your community and get to know your neighbors.

Kay Haggard and her husband have lived in three different homes in PVE since 1974.  In 2012, she became the PVE Neighborhood Watch (NW) Newsletter Editor, and in 2014 joined the PVE NW Board as Secretary.  She has been a faithful and important part of our organization.

She has another side to her community service.  Kay has been involved competing in time trials with her Porsche 356, learning to fly her 1940 Stearman Biplane and getting her private pilot's license in a Cessna 182.

Kay also fell in love with a Basset Hound and joined the Basset Hound Club of Southern California and went on to hold the offices of President, Secretary and currently is the Club's newsletter editor.  Her love of Bassets introduced her to showing and breeding.  Kay is an AKC Breeder of Merit having bred 41 AKC Basset Hound Champions.

We are so happy to have Kay as a part of our organization to help make us successful.

Captain Anthony Best (Tony) is a native of Southern California. After leaving the ranks of the U.S. Marine Corps in 1995, Tony began his career in law enforcement with this City as a Services Officer. In 1996, Tony accepted a police officer cadet position with the department and was assigned to attend the rigorous Orange County Sheriff’s Academy to become a police officer. After graduation, as class sergeant, Tony immediately began to distinguish himself. He was our department’s first motorcycle officer; he later became a canine handler; he was promoted to the rank of police corporal in 2006; in 2007 he rose to the rank of police sergeant, working as a watch commander, the department range master, and department’s training sergeant. All the while Tony continued his education ultimately obtaining a Bachelor of Science Degree from Cal State Long Beach and Master’s Degree from National University.
Tony was promoted to the rank of police captain in 2012 and served as the Patrol Division Commander until 2015. In 2016, Tony was selected to attend the FBI National Academy in Quantico, VA and graduated that same year. Tony currently serves as the Support Services Division Commander. 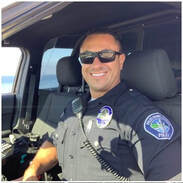 ​About Corporal Aaron Belda:
"I’m a third generation police officer. My grandfather flew the first helicopter for LAPD [Los Angeles Police Department]. He started their aero bureau. As a little boy, I grew up with my single Mom who followed in my grandfather’s footsteps. She was an LA County Deputy Sheriff. First, she was with LAPD, and then went to the Sheriff’s Department and lateralled to the DA’s office as a criminal investigator.

It’s always been in my family. It was a calling for me. It’s not a job or a profession—it’s the only thing I’ve wanted to do. It’s who I am. It’s been in the family and it’s just what I feel that I’m here to do.

My history has been devoted to service and helping others. Once I started, I was hooked. With everyone here at PVE, it’s like working with your family. We just want to say “Thank You” for your support."

Click here to view KNX AM 1070 Report and Audio

What would the police officers like to see us as a community do in order to help you be more successful?
For us to be successful, keep promoting the campaign: if you see something—say something. We rely heavily on the community to be our eyes and ears. We are grateful when we get a call for service where it may stem from a set of suspicious circumstances or something just a little suspicious (or otherwise innocuous)—they call the police and report it so we can go out and make a contact—and it turns into an investigation. Very often, this results in making an arrest for property crime or other offense. A lot of times, if it looks like a duck and it sounds like a duck—it is a duck. If it looks funny, if you see something, please say something. It’s that partnership—that two-way line of communication is what we rely on in order to be successful in keeping the community safe. That’s our number one goal: to maintain the quality of life or improve the quality of life—and ensure the residents have a feeling of safety and tranquility in the city of Palos Verdes Estates.

What can we do to help you?
It always helps us when we know we have our community’s support. We realize that everyone has their own lives and not everyone can take time out to support their own law enforcement, but what I like to see doesn’t pertain to anything official, other than reporting things when you them. It always puts the fire back in our belly when we see a “We Support the Police” sign or a Thin Blue Line flag flying. We like to see “We Support Our Local PVE Police” stickers or lawn signs. Some people are into it and some people are not, but we have all those things available through our POA [Police Officers Association]. It makes a world of difference. There is so much negativity with law enforcement right now—that negative sentiment can make it difficult at times to have a passion for the job. For those of us who are still here, it really does reignite that flame of passion—to see support coming specifically from our community members.

It probably doesn’t have to be anything formal.
Any outreach, even someone waving and greeting us, “Hey Officer, how are you doing?” It just helps when someone engages with us. With all that’s happening around the country and the sentiment towards law enforcement, we’re all just thankful to have a job. We know a lot of people don’t like the police. Nobody likes the watchdog. We get used to people looking at us through a skeptical lens. But it feels nice when someone engages us and humanizes the experience. It helps when you’re not contacting them when you get a call for service or someone’s in trouble or you’ve witnessed them do a speeding violation or a stop sign violation—something out in the street. Just saying “Hi” or letting us know we are appreciated—that means the world to us. I love seeing you out in the field, Merlin. It’s always nice to see your smiling face or you waving at us and greeting us.
Proudly powered by Weebly